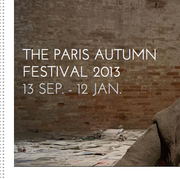 The Festival presents works that stand as references, involving approaches of an experimental nature by, inter alia, commissioning artists to create original works. Every year, from September to December, the Festival features over forty events attracting a total audience of more than 100 000.

This year’s international programme has a particularly strong focus on Japan and South Africa, as well as artists from Europe, Latin America and North America.

Also on the programme: