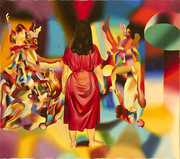 Eugene Brimmerberg’s first major solo show in London presents a collection of works spanning an entire career, from the early 1980s to the present day. New and previously unseen works will be brought from Russia, the homeland of this recently discovered artist, for this exciting showcase.

This exhibition takes place as part of London’s fourth Russian Art Week in the heart of Mayfair. Building upon the market’s increasing attention towards Contemporary Russian art, the city’s premiere auction houses and arts venues will one more host sales and exhibitions of the most exceptional Russian art, both historic and contemporary.

Brimmerberg’s highly distinctive style manifests a deliberate and pointed resurrection of strong technique, as well as a deep sympathy of avant-garde practices now rarely found after waves of postmodernism and cultural relativism. His strong affinity with icons of art history and a conscious rejection of much postmodernism mark a return to art that transcends time and place.

Brimmerberg’s exhibition career was born in the dramatic cultural shift away from official state-sanctioned art in the early 1990s.  But it was in an atmosphere of cultural isolation that the artist previously developed, by seeking to reinvestigate enlightened universal principals in painting and intellectual thought.

Brimmerberg’s bold compositions hover on the edge of figuration and abstraction, stylistically reinvestigating key art movements, from Minimalism to Abstract Expressionism and Cubism. While reinterpreting the genius of early Twentieth Century painting, his attitude towards these recognisable oeuvres is to review them, reinvent them and introduce to them a fresh spirit – characterised through the vibrating bright energy and animated dynamism of the works which pulse with light and life.

Incorporating in addition philosophical first principles and musical composition in the mechanics of his painting, in Brimmerberg’s creativity we find a character that crosses cultural spheres, to square the triangle of independent art forms.  Musically, the artist’s influences are made clear in the titles of his works. Finding in music a source of energy and sensitivity unattainable in life, the tone of the composition in turn informs the tone of his palette. Optically, these dynamics find a balance through the dropping and swelling pitch of the canvas, the artist’s precision in capturing light, whilst the analytical structure inherent in Brimmerberg’s work echoes the philosophies of Hegel and Leibniz – with each element of his art defined in its own terms.

“If art ceases to be the expression of the deepest sense- that is the basis for a human being to shape the idea of its own existence- culture is bound to become a transnational phenomenon, that makes individuality forsake its historical merit, in order to recreate itself anew from the faceless existence of the present.”