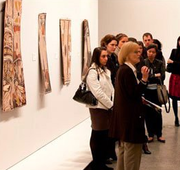 The Trustees of the Art Gallery of New South Wales (the Gallery) invite artists to submit works in competition for the Wynne Prize 2013.

The prize will be awarded, in the terms of the bequest of the late Richard Wynne of Mount Wilson, to the best landscape painting of Australian scenery in oils or watercolours or to the best example of figure sculpture by Australian artists completed during the 12 months preceding the date fixed by the Trustees for sending in entries.

Entries in the Wynne Prize competition are also eligible to be considered for:

To be considered for selection, a competitor must comply with all entry instructions and conditions.

The artist must have been resident in Australia for the eligibility period: see Key Dates above.

In any year, a competitor may enter one work only. This does not prevent the artist entering other works in other competitions such as the Sulman or Archibald Prizes.

RSVP for Enter the Wynne Prize 2013 to add comments!