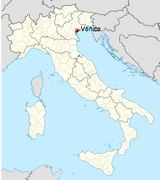 The 55th International Art Exhibition will take place in Venice from June 1st to November 24th, 2013 at the Giardini and at the Arsenale (preview: May 29th, 30th and 31st 2013), as well as in various venues the city.
TICKETS >>
The title chosen by curator Massimiliano Gioni for the 55th International Art Exhibition is Il Palazzo Enciclopedico / The Encyclopedic Palace. Massimiliano Gioni introduced the choice of theme evoking the Italo-American self-taught artist Marino Auriti who “on November 16, 1955 filed a design with the US Patent office depicting his Palazzo Enciclopedico(The Encyclopedic Palace), an imaginary museum that was meant to house all worldly knowledge, bringing together the greatest discoveries of the human race, from the wheel to the satellite. Auriti’s plan was never carried out, of course, but the dream of universal, all-embracing knowledge crops up throughout history, as one that eccentrics like Auriti share with many other artists, writers, scientists, and prophets who have tried - often in vain - to fashion an image of the world that will capture its infinite variety and richness.”