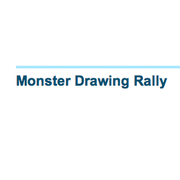 Time again for the Monster Drawing Rally, a live drawing and fundraising event hosted by Outpost @ Armory at Armory Center for the Arts. Featuring live drawing by 100 artists, the event includes tacos, food, beer by Craftsman Brewing Company, music, and kids drawing activities. Admission is a $10 donation at the door.

Monster Drawing Rally is an annual tradition established in Los Angeles by Outpost for Contemporary Art, now Outpost @ Armory. The event concept was developed in 2001 by Southern Exposure, a San Francisco-based, artist-centered, not-for-profit, and has continued to thrive there since. Outpost @ Armory is pleased to bring the concept to Los Angeles' vibrant art scene.

RSVP for Armory Center for the Arts | 2013 Monster Drawing Rally to add comments!